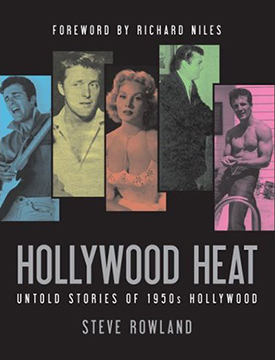 As a member of Hollywood "royalty", Steve Rowland is in an ideal position to kiss and tell about the movie legends of the 1950s, his friends and neighbours in Beverly Hills.
As an actor with credits in a dozen classic 1950s pictures and many great TV Westerns, Steve worked alongside many shimmering stars of the motion picture firmament. But he was also a teenage gossip columnist with an insiders access to all that was most hot and happening in Hollywood s golden age.

a word from the author: Steve Rowland


Gigging with God at the Lighthouse

The blistering hot August afternoon had recovered it’s breath. A gentle breeze began gathering a tempo that rescinded the heat’s intensity, as it chased the sun westward into the waiting arms of early evening.

narrated by the author: Steve Rowland

It was Sunday and fast approaching five o’clock. I was late for the two o’clock kick off, but I was packing excitement and more than ready to groove into the early hours.

Dressed in Penny Loafers, Chinos and a faded black T-shirt, I hastened my decent from the undulating sidewalk, down the well worn steps that led to the entrance of No. 30 Pier Avenue, Hermosa Beach, California, the revered home of the world-famous, West Coast, modern jazz laboratory, The Lighthouse.
Legend has it that this kick-ass structure was spawned from the belly of one of the many working concerns that through the years have displayed  beacons of guiding light to hapless ships caught up in distress while fog-bound off the southern coast of California. It’s the real deal, not an imposter.

The hurricane in my eyes suddenly surged to my feet as I stumbled in haste, stabbing myself with extreme embarrassment in front of a reclining group of solid senders. I hoped that they hadn’t noticed my fuck-up—but that was wishful thinking.

Lounging about outside the doorway in various shapes of stoned enthusiasm, were a cluster of shirtless jazz heads catching the last of the sun’s rays, while engulfed in the soothing sounds that sneaked through the architecture and out into the slowly departing afternoon heat. The smiles on there faces as they checked me out said it all.”.